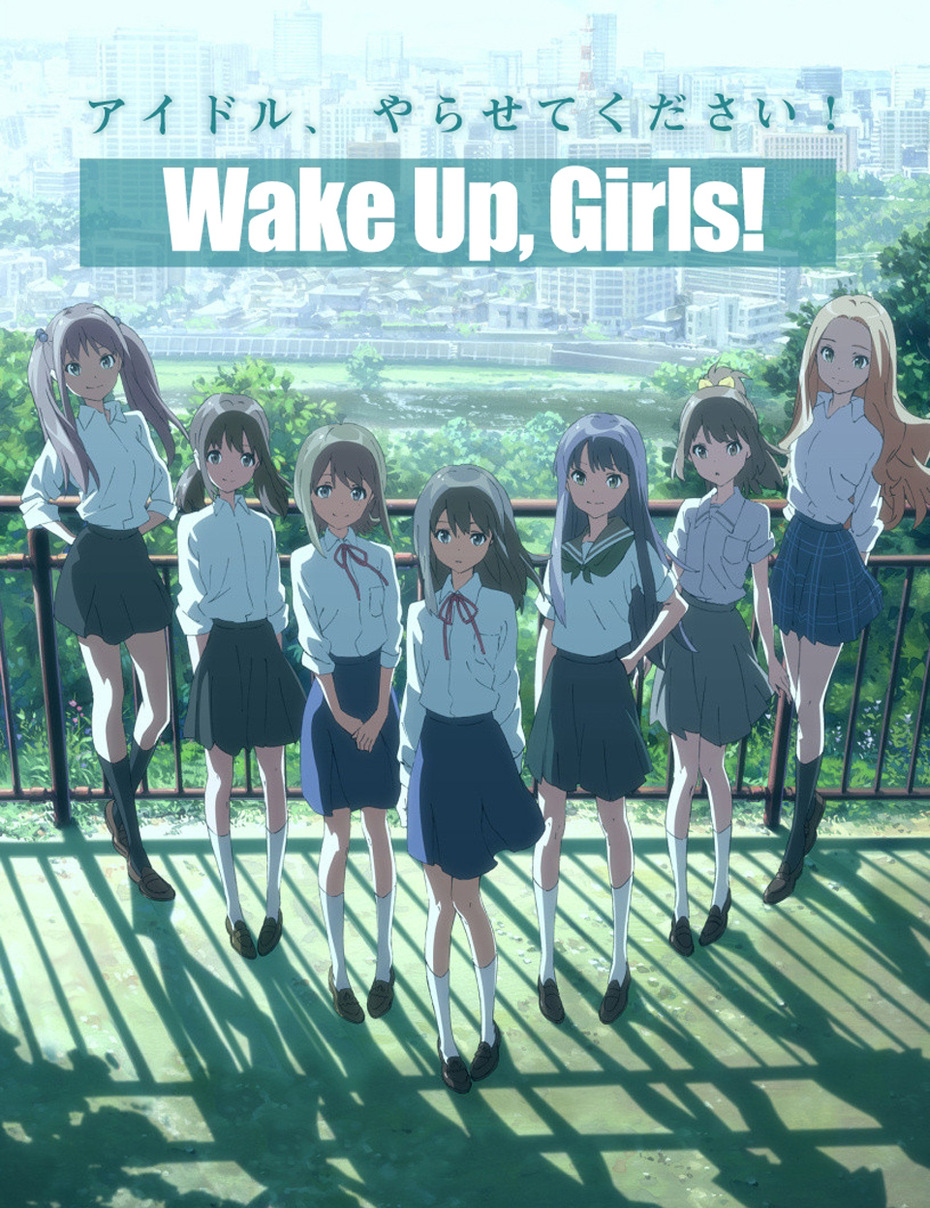 Wake Up, Girls is a relatively fresh take on the idol sub-genre and surprisingly,   unconventional enough to be noteworthy of spending time with.

As the Winter 2014 anime lineup comes to an uneventful and meandering end, I would have to say that overall, most of the series were marginally better than the last season, albeit limited. With the exception of a few stragglers that I yet to finish off, I would have to say by far that Wake Up, Girls! reigns supreme as my favorite for this season and impressed me from the get go with its prequel movie. Already smitten the “idol and music” sub-genre, Wake Up, Girls certainly does presents a unique experience from its other counterparts: not as campy as The idom@ster, affable as Love Live, or imaginative as AKB0048 – it is at least very capable of painting a grounded and merciless depiction of the idol industry. Not a feat attempted by many titles, yet one that is handled moderately well and produces some  fascinating results with human face put on things. To this end, it isn’t the only thing that makes the series enjoyable, but if you like the typical “dark horses becoming worthy competitors”  this is the one for you.

Of course, calling the Wake Up, Girls! or WUG for short dark horses is more than understatement. With the prequel movie showing how the girls came together and to be, the series chronicles their struggle to become fine idols. They can’t dance well, carry a tune with ease, and seem to be only kept together from becoming just “another idol unit” by the graces of former I-1 Club’s center,Mayu Shimada that joins up to reclaim some happiness that she couldn’t find before. Just like with the prequel that makes Mayu the main focus, the TV series does as well for most of the earlier episodes, but also develops the other characters personalities later on as the girls run into roadblocks both external and internal that don’t seem to be recoverable from with each episode, but does in the end. Airi becomes a more skillful and confident member, a better, stalwart leader in Yoshino, and Nanami puts her Hikarizuka Theater dreams on hold for the sake of the group. Considering how compact and rushed the episodes seem from a writing standpoint, the execution of ideas actually pan better than expected to create a nice journey of drama and a few laughs along the way. Regrettably, it does hit a few rough spots with regards to how some of the elements like drama plays out or how some the elements come off less than stellar (final episode with Shiraki trying to express the essence of entertainment for example), yet doesn’t exactly pose anything of serious consequence that subtracts from the series.

Although, where WUG journey takes a more “Cinderella story” approach (minus the fluff) , their rivals, I-1 club is the more calculating and ruthless side of the idol industry, as the show gives a few insights on how the I-1 club girls unit produces perfection. Admittedly, more the harsh punishment that goes on in the unit seems like sensationalism to many viewers, yet with the show throwing around various callbacks, references, and allusions to the idol scene (see episode 9), it is somewhat believable and portrayed as truth. However, with all that withstanding, the show has little to do with the idol industry as a whole as it does focus on the hard work and dedication it takes to reach such heights. Its nothing novel or fundamentally new that other series haven’t chipped into too before for any genre – but seems to work just fine for Wake Up, Girls!

As tumultuous as the girls journey is for either side, Ordet has a few problematic issues of their own animation wise. With the studio trying to be one of few that implements full-frame animation in lieu of CGI for some the dance numbers and performances, it doesn’t work out so well more than it looks jagged and awkward. This might be in an effort to further the authentic concept or breakaway from the traditional means of doing things, yet not exactly the series you want to attempt something so high budgeted when the artwork itself is not well-defined. Examples of this can been seen in the character designs that look generic in the case of the WUG members that are only saved by unique identifiers such as Airi’s facial birthmark or Miyu’s “twin tail” hairstyle. Most of the music, vocal or non-vocal also fall into the category of average – accredited to Satoru Kōsaki, Ordet’s in-house composer. Compared to his other works in series like: A-channel and Kannagi that were mildly pleasing, both the instrumental and vocal pieces seemed lacking or limited for an idol anime series – yet I did enjoy some the vocal pieces like the opening theme, 7 Girls War that fits in perfectly with the shows motif.

Without reservations, I can say that Wake Up, Girls might not resonant with those that aren’t so friendly toward idols or idol anime, but will at least be appreciative of the of story of a bunch of nobodies close to becoming something more . It does have a few problems when it comes piecing together general story elements and even bigger problems maintaining its animation, but elsewhere, the series does more than it needs to. If you are looking for a title that you might have passed up on and need something to fill the time until the next season, you can’t go wrong with this one. Even if you don’t consider yourself an idol aficionado it is still worth giving a go and might surprise you otherwise if given the chance.

Cons: poor animation quality, still grazes over some of the characters, music selection is slim from both vocal and non-vocal track.