Underneath Sorcery Saga’s cute and bubbly appearance lurks the heart of a true rougelike that should please both newbies and with some luck, veterans alike.

When comes down to the video games by genre, none can be more imposing than the Rougelike –  a sub-genre of RPG’s. Often notorious for features such as permanent death and resetting the players progress back to “nothingness”, there are some that can accept the challenge and others want no part of the trifle. There have been various series like Pokemon Mystery Dungeon, FTL, and Dungeons of Dredmor that have done the genre honors in promoting its popularity, but when it comes down to making them attractive to fringe newcomers that might of had a thorny tryst…that is another story. Granted softening this brand undermines the spirit and experience of “risk vs reward” or “adversity vs clawing to victory”, Sorcery Saga takes the same exact formula, but only does thing one thing different to it that is odd: Adds humor. That might not seem like much and arguably just make it comical for sake of comedy, yet I can assure you underneath Sorcery Saga’s cute and bubbly appearance lurks the heart of a true rougelike that should please both newbies and with some luck, veterans alike.

The gist of Sorcery Saga’s story stars Pupuru, a student from a certain magic academy in the midst of her graduation test: retrieving a magical orb from Mado Tower. Of course, instead the orb she finds a creature known as Kuu (named after the sound he makes) whom she befriends and manages to make her fail the exam due to Kuu eating it. To make matters worst, Pupuru favorite curry restaurant, Curry Smile is on the brink of going out of business, until she decides to gather 4 legendary ingredients that can make the “Legendary Curry” – a menu item that might save the store. Zany as the general plot sounds, that is the tone carried throughout the game with whimsical, quirky characters and moments that are accurately reflected in the dialogue. Arguably, while I can say that it looks like Aksys had too much fun with the localization game sporting very tongue-in-check translations (albeit correct); most of it is downright amusing as it is clever; with various Easter eggs and pop culture references littered everywhere from the chatter between characters to the equipment flavor text. The game only has a Japanese audio track, so if your fond of that, you can enjoy it in its original form that does bring out the cheerful and jolly nature of the atmosphere and story. On the order of gameplay length, depending on what type of player you can quickly breeze through this game in 25-30 hours, but since consideration and failure is par for the course, 35-40 hours (including post content) is what can commonly be expected.

In order to prepare for any dungeon diving excursion, the hub city is the starting point, allowing you to: store items/cash in Pupuru’s room and attach seals (more on that later), see extra events and gameplay records at the library, and buy/sell items at Curry Smile. Once preparations are complete, you choose the location you want on the world map and off you go. However, before getting to stepping foot into any dungeon, players usually have to contend with an intermediate section that ranges from two to three areas long. It won’t present too much of an challenge, but will give the player a preview of enemies they can expect to deal with, items they can get, and basically to build some confidence Just like other dungeon rougelikes such as: Izuna and Shiren the wanderer, mechanics work on a fluid turn-based system meaning for every move and action you take, so do the enemies, thus vital you best be prepared as well as you can before hitting up the inside. Once you are inside the dungeon, not much changes. Despite all visits to any dungeon being procedural generated and different each time you enter, the same or similar hazards present themselves: stat boosting/lowing magic circles, curses put on items (curse items once equipped, can’t be unequipped without Holy water or a magic circle that will remove it), monsters, special floor restrictions, and so on. Alone, many of these threats don’t factor into serious setbacks, but together…well, you going to find yourself in trouble if you happen to run out of potions and can’t take down a pesky foe that can hit you three tiles away. So the question is: What do you have in arsenal to counter these issues? 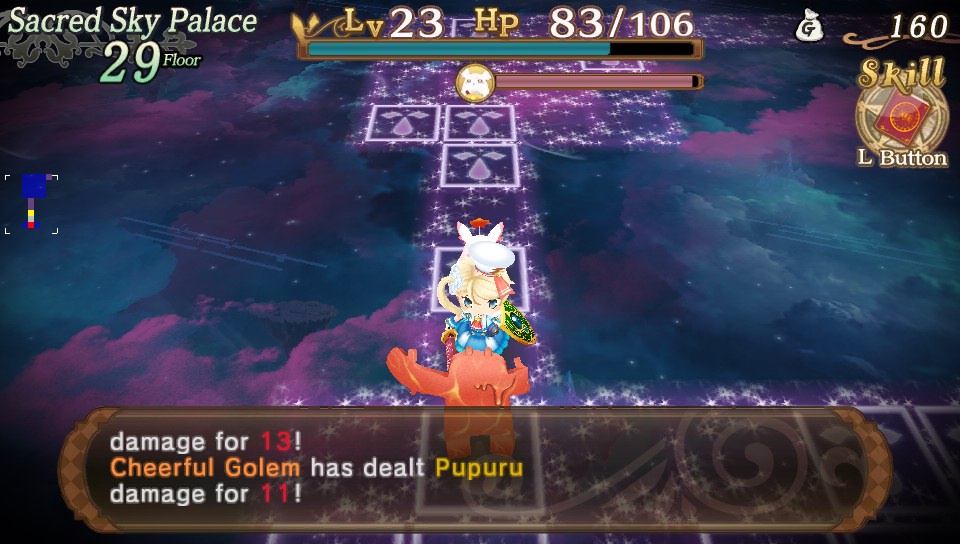 Apart from being able to whip up temporary stat boosting curry (providing you have the required ingredients) and customize your weaponry with different seals that will endow them with different properties (attack an enemy from three tiles away, etc), you have your companion, Kuu who just doesn’t follow you around to look cute, but fights, too. Unlike the player that can level up by killing enemies, Kuu levels up as you feed him whatever you find lying around or on hand. Feeding him often, he can sometimes learn special abilities (4 at any given time) and refill his hunger meter (his health), but feed him the wrong thing and it actually hurts him decreasing the meter. Since different items don’t always give you the same ability and later on, different items do different things, trail and error is the only method that will work and thus, it sometimes comes down to luck to get useful abilities for him like Kuushi Case (store 8 items for Kuu to keep upon your death) or Kuu Laser (attack enemies from three tiles away and through objects). Sadly, as helpful as Kuu is, Compile Heart didn’t so hot with programming his AI, often lagging behind due to being stuck going down long corridors or wandering off only to become helpless fodder for enemies. Of course, even if Kuu does behave and you neglect feeding him, he will cry out periodically that will cue enemies onto your positions, so best to keep him feed lest you want a cute, whinny liability instead of an cute, battle-ready asset. If you happen to die (due to your own misgivings or Kuu) you will lose everything: all your levels and Kuu’s, cash, and items to only be whisked back to town and start anew. However, since you will most likely die…. a lot, it is actually not as frustrating as it sounds and in return for the information you now have access to, you also might have come across another tangible benefit.

During your adventures, you might run across special chest that contain weird items. These items stay with you even upon death, they don’t grant you anything of value, but do unlock little scenes and vignettes in the character theater. These scenes don’t contribute to the general storyline, yet are more for your own amusement to learn more about the characters you meet. After watching them, you can gain items like spell books to learn more magic or swords skills and even things like rare potions. Instead of punishing the player, this actually is a nice reward system, if you happen to find one and acts as an incentive to the player to return to specifics dungeons; even if you happen to clear it, to find these chest, since there are lot of items to collect that can’t be found in one particular region. Personally speaking, this was the highlight of the game for me; even though I was  frustrated with the many deaths I could have avoided, the humors little exchanges was encouragement enough to do better as well as find more chest by lingering in the dungeon to explore every nook and carny, instead of heading to the stairs at the first opportunity. Yet, if you don’t happen to have anything, there is an extra and short dungeon called “Restore” that can net you some sufficient items, if your restless to jump back into the storyline one without having to do it ill-prepared.

If you never experienced the “rougelike” genre before and want to get hands wet, I would say that Sorcery Saga is an okay fit for greenhorns to the arena. It won’t hold your hand and explain all the finer features that it offers or even bother with intuitive details, so for that reason it might also appeal to the more “advance” members of that audience. Despite it obviously having a few shortcomings: like its choppy framerate, bland music, and limited post game content – it more than covers those fault by providing a lighthearted narrative with vivacious humor and straightforward gameplay that is neither is too arcane to understand nor too simple. Certainly, the game does fit into the tradition of rougelikes and just as tough, but if you looking for a more amicable version that doesn’t take itself too seriously and relaxing to boot, it is very much worth looking into and should be a very pleasant experience to ingrain yourself in if you are willing.