Return to the world of Gamindustri in Hyperdimension Neptunia Re;Birth 1. Trust me, it will be well worth the trip.

When I think of video games that have been remade opposed to ones in dire need of the treatment, Hyperdimension Neptunia definitely falls into the latter categorization without question. Omitting the affable charm the series can and does exude, all the charisma in the world didn’t service well with its stateside debut as it was subjected to a myriad of vitriol ranging from the contentious “oversexualized characters” to the more apparent fact that the game was just insipid and dull. Ideal Factory did take the fan criticism to heart and over the course of two improved sequels and a spinoff later, Re;Birth 1 is what came fruition. Needless to say, the lessons learned from the forebears are well put to use, but there is one more thing that does standout above all else: It is really entertaining. 3 years ago, it was difficult enough to say that about any of the titles separately, but bringing together the best and helpful features of all three of the main titles, it is a claim that is justly made as well as not hard to see for yourself. 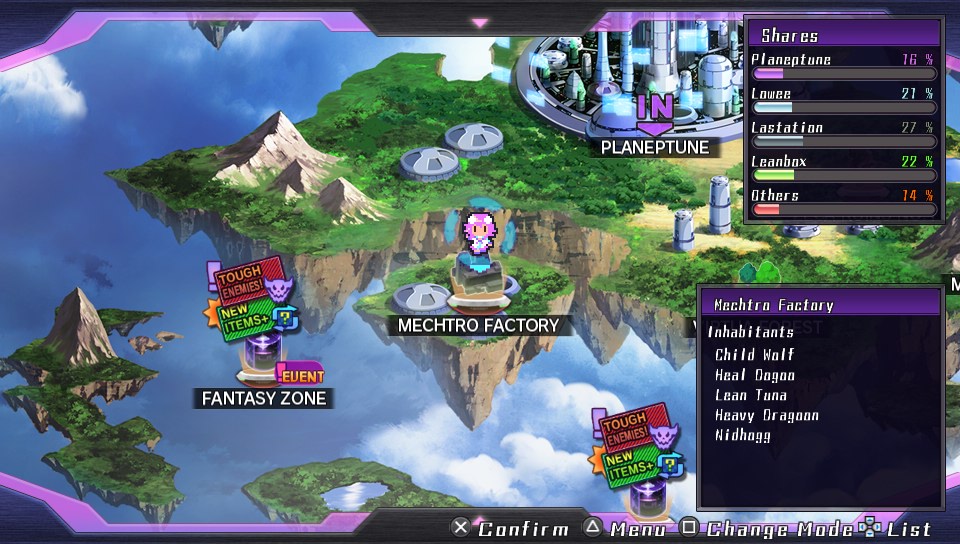 Much like the original, the storyline follows the journey of Neptune, one of the quartet of goddess that rules over the world of Gamindustri to retrieve her lost memories after the conflict known as the “Console Wars” against her fellow peers caused her to lose them. Still hanging onto the same lighthearted atmosphere and jovial tone that pervades its successors, the series is never one to take itself seriously as it pokes fun, parodies, and references the world of video games and casually (if not outright shamelessly) breaks the fourth wall for the sake of humor. With much of the original script being overhauled and rewritten to include the addition of new story elements, characters (removing others due to licensing), and overall mood – returning players will have plenty to look forward to and newcomers able to enter without feeling left out in the lurch. Even though the game has changed localization hands, Idea Factory International has left most of the handy work of NISA intact while able to forge a compelling, albeit comedic narrative. So if you are worried about Neptune losing any of her dorky humor or Noire’s industrious, loner personality spared, that is hardly the case more than it is magnified due to the rewrite.  With 8 chapters in total and 2 endings to achieve, the game easily pushes 55+hrs of gameplay and two playthroughs needed just to see all that there is. So this will keep you more than occupied and provide a moderate challenge to boot.

Just as with the forebear titles MK2 and Victory, most of your time will be divided evenly between viewing key story events with a visual novel-esque aura and going through various dungeons to progresses. The world map system is one the most noticeable features to change as it take nods from Victory – easily displaying the dungeons you can explore and towns, the latter amounting to nothing more than a menu allowing you to: buy/sell items, visit the guild to pickup optional quest, acquire information that will present you with various items, disk development (more on that later), and also a museum mode allowing you revisit music and illustrations from the game. When all preparations are complete, dungeon diving will be the next stop as you encounter a variety of enemies from Super Mario looking pipes to large floating whales in a gambit of turn-based combat. Taking yet another page from Victory for the battle mechanics, fights are a fusion of fast–paced and tactical bouts were you use special attacks and combinations to deplete your foes Guard Points (GP) before beginning able to cause serious damage to their Health Points (HP). Since monsters do the range in their ability to dish out damage as well as take it,  Neptune and her fellow goddess team mates have the trump card of transformation on their side – with sacrificing 20% of their SP for the battle, they access HDD mode which provides a great boon to their stats. Add in other mechanics like EX attacks and weapon attack ranges (some weapons can hit multiple foes at time depending on where you are), and the game does have a fair amount of depth that contributes to the experience. Whether you are a newbie or expert RPG player, the mechanics are far from archaic as the game provides plenty of tutorials for you that at the very least, is a great and quick primer on what is required of you and how to own what you have to work with – characters and all. There are a lot of options and with you able to bring 6 characters into battle (3 will be present and you can switch between the other 3 at any time) the possible and synergistic stratagems are nearly endless.

Besides the additions from Victory, another new feature called the Remake System (aka Plan) has been implemented that effectively replaces the scout system from the aforementioned title and acts similar to MK2’s Item development. All you need is the material that can easily be found in dungeons and the specific plan (also from dungeons and map events) to be able to create literal anything. Items, weapons, and accessories you create will be added to the shop for you to purchase, but you can also make various changes to the game itself like: Making stronger enemies spawn, discover new dungeons, rotate what items show up in dungeons, and even make most foes weaker or tougher to fight. While all this does seem fanciful, you will be using the system often, especially during quest since many require to hunt monsters and gather items that might not can be found through normal means. Searching for the items can be more time-consuming than they are worth the effort, but it ultimately becomes enjoyable as you unearth more plans that can turn into beneficial windfalls for your characters. Disk development also is another returning feature, where you get to exchange medals for disk you received on various quest and equip them with chips. Disk are different and can hold a certain level, number, color-coded chip that range in ablities like: decrease character turn wait time, recovering SP, and even providing extra defense against certain foes. If you manage to mix and match different chips, you will create a “Godly Game Disk” that offers special perks and abilities. This is another nice customization option, but the only caveat is that one character can only hold one disk at a time.

As previously mentioned, the game truly doesn’t feel that different from its other cohorts, since Ideal Factory International kept all the terminology as it was and even brought back the original voice acting cast for both the Japanese and English voice tracks. It felt very satisfying seeing many of the familiar characters back in the mode of their personalities and rifling off witty one liners as it was to see new faces into the mix. One of my favorite additions is MarvelousAQL, representing the real life company of the same name and made to resemble the Senran Kagura franchise characters. Sadly, as much as I do appreciate everything remaining as it was or changing for the better, I do wish the game did add new music renditions and other novel assets such as areas rather than copying them from MK2 and Victory’s repertoire. There are a few new monsters that crop up and even remixes that are taken from the landmass themes, but that is virtually all and one of the adjustments that could make this feel more like remake rather than a regurgitated product. Either way, it is not a compromising gripe, but something that would have been welcoming to see. All that aside, the graphics (on a technical and visual level) are very impressive. No longer do you have to set through laggard cutscenes or deal with unappealing designs – everything looks very crisp and performs fluidly to say the least.

All-in-all, I really do believe that Hyperdimension Neptunia Re;Birth 1 will be game that its voracious fans will enjoy and newcomers will find just palatable as most critics will too. For a company that is releasing one of its own products, Ideal Factory has done great thus far with not only its localization, but also making it feel like a familiar product and one that fits perfectly for on the go play. There is no denying that it will sit well with RPG fans, but hopefully ensnare a couple of outliers that don’t mind the game presentation or mood. With MK2 getting the same Re;Birth treatment to the Vita and other titles in the works besides the Neptunia franchise, I am looking forward to Ideal Factory International releasing more stateside, if that is their prerogative. Looking at Re;Birth 1, I really hope that is the case and eagerly waiting for what comes next.