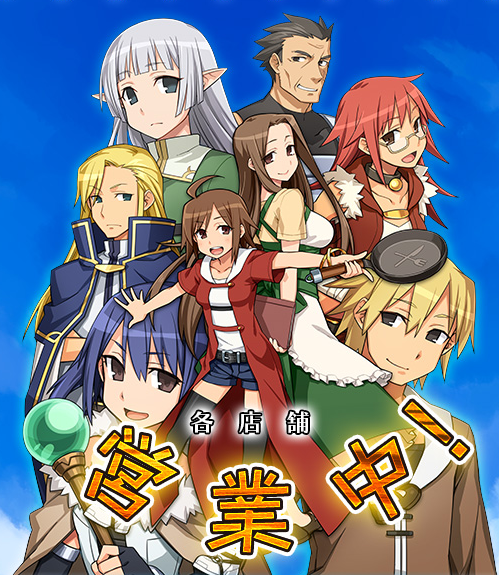 Ported from the world of mobile to Nintendo 3DS, Adventure Bar Story is RPG meets simulation as you help a hapless girl named Siela and her older sister Kamerina keep their family restaurant afloat. Reminiscent to titles such as Recettear: An Item Shop’s Tale and the Atelier franchise, Adventure Bar Story holds up just as well mixing the travails of running a business and developing your skills – cooking and combat based to do so.

With the perfunctory information out the way, the general goal in Adventure Bar Story is a simple one: gather materials from other areas, use those materials to make different food items, and sell said food items to accrue money that you can use to buy more precious materials or equipment in order to tackle more difficult areas. One-dimensional as the flow of task maybe, the game surprisingly stays out of the realm of adding needless mechanics or becoming dull by virtue of simplicity as you not only take on the role of the de facto restaurant manager, but also adventurer in search of procuring ingredients to keep operations running as smoothly as possible. In this case, simplicity might not necessarily breed complexity, yet still pans out to be a pleasurable yarn of repetitive chores with some variation.

Before you prepare to set out for your daily excursion it is important to note that you can only travel to one area per day. So if you choose to go to the forest for an extra haul of veggies, you can’t go elsewhere and will have to return to town immediately. Other than that, the rest is straightforward as you go to a designated area and literally pickup items you see littered about the environment called “mats” (short for material). The different visual appearances denote what specific mats are (I.E: Diary Products will look like well..diary products.) and can always tell what mats are plentiful in which region by checking the World Map selection screen before going in. And just like most RPG’s, random encounters are par for the course as you use a party of 3 to defeat the opposition. However, while your characters are able to learn skills by participating in combat, they don’t level up like you would in a traditional RPG. In order to make that happen, food consumption plays an integral role. This makes searching the whole environment you visit and defeating enemies very important. You can elect to buy most mats, but best to only purchase what you don’t have or low on due to expense. Yet to create wonderful meals fit for eating and even selling, you will not only need the mats, but also recipes and proper tools. 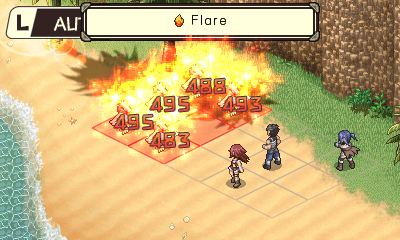 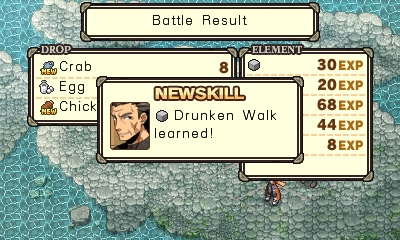 There different ways to gain recipes and the simplest method is just to talk to people. It won’t teach you the full recipe, but will give you hints to get started. The second method is just to outright buy them from the various shops available. It is the most efficient method due to the fact you can also purchase the tools for them, too. The final method and more practical one: just guess. While you run the risk of wasting ingredients if you get the recipe wrong, most dishes do follow a real world equivalent. For example: a riceball is made with rice and salt as the mats and the cooking tool would be with your bare hands. Not all recipes are this simple and can have multiple takes on them and even differ in value and the experience points doled out, so there is a lot to consider when making items or even determining which to eat or sell. That being said, when you do have items to sell, hand them to Kamerina to open up shop and watch the money roll in for day. If you managed to pair up complimentary items, sales will boost. This is extremely important when competing in cooking contest held multiple times each month, since winning them and moving on to the next bar rank will require more sells – making complimenting items a viable idea. Rotating what items you sell is also key, as selling the same goods repeatedly over a period of time will make the customers less likely to purchase them and even dissuade other purchases. After a couple of days of staying off the menu, the item(s) will be back in demand.

Adventure Bar Story might be thoughtful when it comes to the core gameplay, but is a mixed bag when it comes to basic design choices and other aspects. For example: while most events such as obtaining new party members and getting access to new areas follows some modus operandi, it is inconsistent and very vague, making the bar rank system listless measure of progress. The game does have quick tutorial, but one that is very scant and doesn’t even begin to allude to the some the finer details it has to offer. You don’t need the assistance of a guide, although helpful to find some of the more obscure secrets. Using field areas an example, most are larger than they appear, often containing hidden pathways that contain extra items or will trigger different events. In some ways, it is up to player to find them, but the artwork doesn’t do it justice when most environments and areas looks like one homogeneous model with no distinctions or prompting any reason to explore. Paired with the absurd encounter rate, you most likely won’t care to explore rather than quickly leave from the constant bombardment of foes. Meager as the music might be, it at least makes the combat/material gathering portion a little less dull and tedious. Of course, even that begins to wear out its welcome after the initial few hours.

Regardless of the shortcomings, the enjoyment factor to be had in Adventure Bar Story far outweighs the annoyances. The game does have a few ins and out to learn, yet most don’t require any extra hand-holding to figure out or turn into one lengthy tutorial before you can play. With some minor post-game material and tons of recipes/items to catalog – the game will keep you entertained and occupied well into 45 hours, but also easy to put down and even easier to come back to. You might can save yourself the trouble and couple of dollars going for the mobile version, but with all the improvements made to make this a comfortable handheld experience, the Nintendo 3DS is a perfect fit – both in the looks and ergonomic department. Whether you only have a few minutes to spare or couple of hours to kill on a non-involved commute, Adventure Bar Story will at least keep your attention satiated. Not too sure about appetite, though… ——————————————————————————————————————