Putting aside its naughty gimmick, Monster Monpiece is truly one that is better off without it when it already provides a robust and competent collectible card game that brings with it some kind of decent amusement. Might not be the type of amusement you seek, but at least it is something.

With a limited selection of games and most taking advantage of the touchscreen functionality in some unusual ways, the PlayStation Vita has gained something of an unsavory reception in the west as the home to some very weird and perverted Japanese games. While this issue is not only unique to the Vita as it pertains most Japanese games in general, it is hard to deny that this is becoming something of an annoying trend – especially when there are many titles that do have more to them than trying to sell to the lowest common denominator in the home country. Monster Monpiece, for all of its emphasis on scantily clad anime monster girl cards and one particularly polarizing feature – it is actually held together by a very well-defined mechanical backing and actually sort of fun once you get started in earnest – only if it is for a couple of hours.

Reluctant to give the story same credit, it does at least make sense as the player takes on the role of May, a young girl that is out to save her friend after succumbing to a curse and becoming known as one of  the “Lost”. Teaming up with her friend Karen and her feisty monster girl partner Fia (a detail tied to story lore), they venture across the land to enlist the help of others in order to prevent this curse from spreading. As far as protagonist go, May is a very timid girl – always being unsure of herself and mostly having her friend Elza look after her – a role that now falls to Fia as May’s foil. Over the course of the game, May does grow as a person and glad to see things work out the way they do, but don’t expect the writing to be captivating – especially when the dialogue itself suffers from tedium and wayward developments. 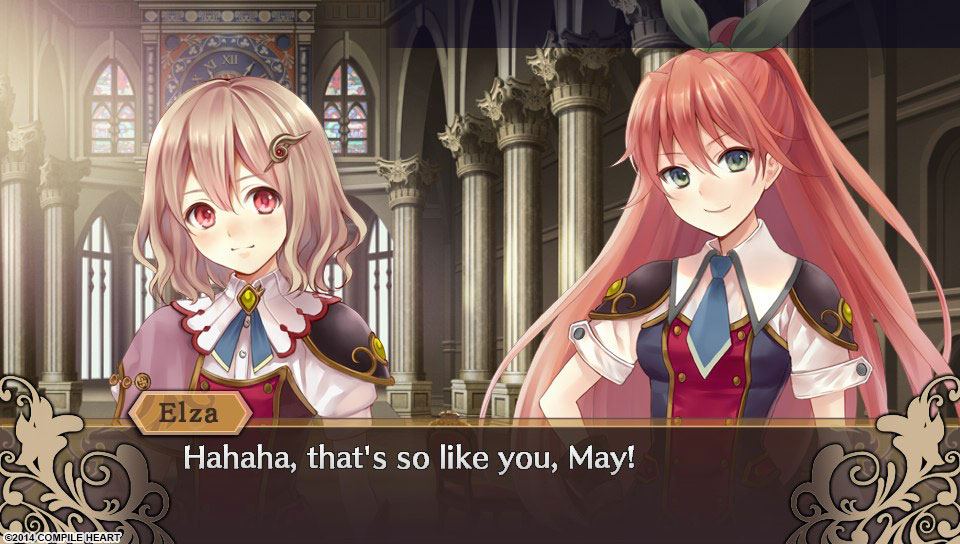 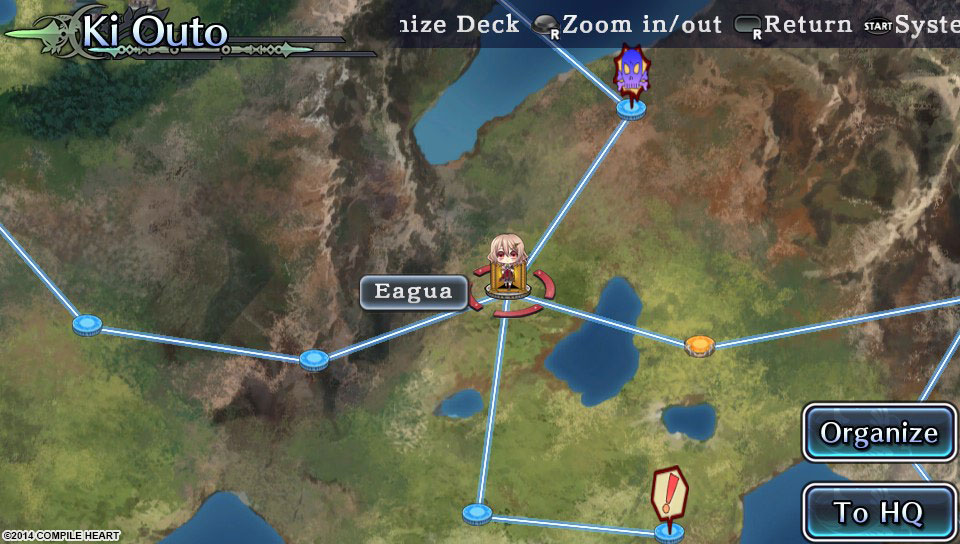 Progression in the game is rather simple, too as you usually sit through a quick visual novel style preamble before being let loose on the world map where the objective is to head to the next story related event marked by an “!”. Of course, as you travel along a fairly linear laid out path, other predetermined events will occur such as: finding money for buying items/cards, getting new cards, obtaining rub points (will be explained later), and finally, getting into battles. Being a card game at its core, Monster Monpiece is all about deck construction and making one that works for you. While you are beholden to a few simple rules you can actually get as unorthodox as you please – something unheard of in most card games, yet the most creative combinations often do become the most useful rather prioritizing the strongest or “best cards” – something most card games would probably come to a consensus on. And with over a 100 cards to choose from, getting down and dirty with some of the combinations you can knit together is just as fun as getting into the actual matches. 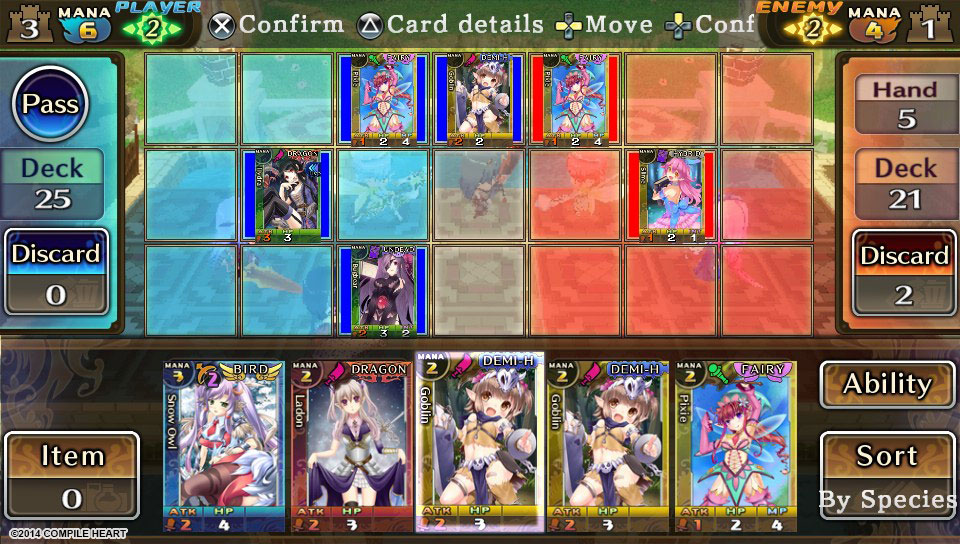 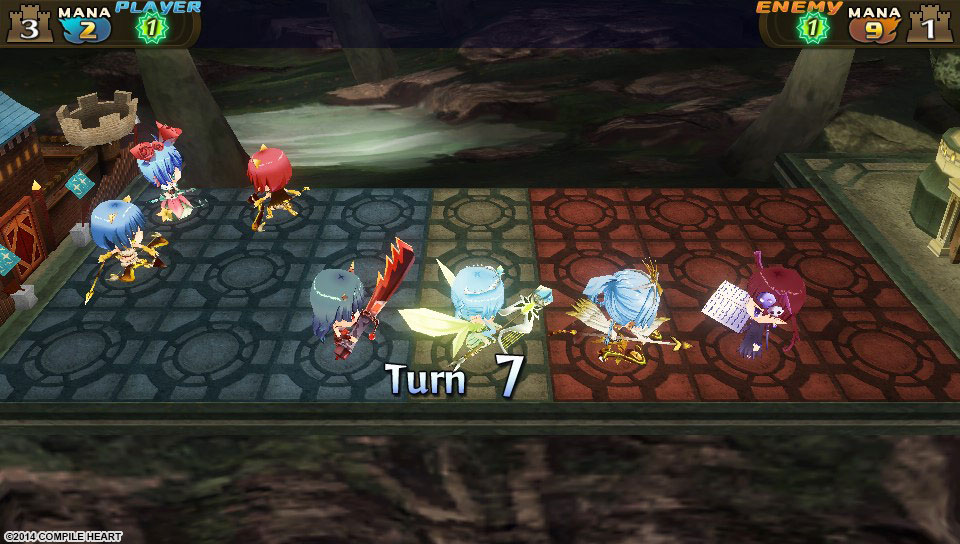 Battles take place on a 7×3 grid with 3×3 of that reserved for your side, the same for the opposition, and a neutral 1×3 area. The goal is to simply send your troops to the opponent’s side where the based camp is located to attack and reduce their life points (display in upper hand corner) to 0. In order to summon any card you will need mana, a currency that replenished on your turn by some set amount depending on the guidelines at the beginning of the match. From here, the game sort of does turn into a weird battle of attrition where you summon a monster, your opponent summons one to block your own from proceeding down the lane, and so on until one side shows some slack. However, the game does have a lot more complexity latched onto it. For example: if you summon the same color card in a row, you gain an extra bit of mana come your turn. Another neat trick is the fusion mechanic, where if you summon a monster of a similar type on top another, the summon will provide the new card with a rise in stats for that play session, potentially making an otherwise dire situation favorable. Add to that the ability to have different type of cards work together dependent on their spacing on the field and even special abilities such as being able to move right away once summoned, and the game does provide something of an interesting framework to develop inventive tactics around these cards. Since your CPU opponent can very well take advantage of the same mechanics – paying attention is required, but sadly, the difficultly imposed by the computer is negligible at best. Online play with other players locally or region wide does make a better case, yet something of a shame considering the lobbies are mostly devoid of human life.

After and before battles and scouring the map you do have the chance to do various other things like: construct new decks, buy new cards/items, and improve the monster girls you have through a mechanic called “First Crush Rub”. Choosing the card(s) you want to power-up, you will be prompted to use certain number rub points based on the number of cards and monster girl you chosen. After confirming the aforementioned, you be introduced to a mini-game where you turn the Vita sideways and using the back and forward touchpads target different regions of the monster girl’s body to fill-up a gauge on the side before time runs out. Since different touch styles (I.E: pinching) will fill up the meter faster as will targeting different areas, it does become somewhat difficult trying to find the sweet points depending on the girl. If you were successful in filling the gauge before time, the monster girl will receive stat changes. Some will get stronger and some will even receive decreases in stats, but for either case, the tactical roles and the way you use them will also change as well – with many also gaining special abilities or benefits like lowering the mana cost.  Despite the frivolous and questionable nature of the mechanic – it is one that is near unavoidable to use for the invaluable options it presents and keeping up with the A.I that gains upgrades to its own deck during various storyline portions. If you ever find yourself in need of more rub points, cash, or just want to test out your deck, the training mode gives you the chance to go through previous battles yielding all the benefits from winning.

Given the fact that the Vita is looking at a shorter lifespan than its predecessor and the trend still stands that Japan will keep producing what they are with the western territories getting the tacky leftovers, Monster Monpiece can at least be proud in the fact that it isn’t as bad as the rest of its counterparts. Despite it suffering from the same repetition and tedium all card games seem to struggle with, that necessarily doesn’t make it a nonstarter – unless you are really opposed to the idea and gameplay. There are better Vita games out there that I would surely recommend such as Ys: Memories of Celceta and the infamous Persona 4 Golden, yet that is very short list, and Monster Monpiece happens to one amongst few that I can’t recommend. Fortunately, it does serve the purpose of a dividing line – a line that only leads to scrapping the bottom of this proverbial barrel that is the Vita and what else it has offer – perverted or otherwise.