Out of all the Summer 2015 anime I have viewed, Jōkamachi no Dandelion or Castle Town Dandelion is a scatterbrained comedy that oddly enough, offers wholesome entertainment – something that very few titles have managed to do for the season. Following the story of a royal family and its 9 supernatural ability wielding children vying for next in line to become king, that is about as outlandish or as pie in the sky as things can get. Bringing some flavor to the lineup, it also might be a better choice to what some fans might be looking for as far as moeblob series go.

The story revolves around the Sakurada family, a family of nine super-powered siblings whose father is the king. It focuses on Akane, the fourth eldest, who is extremely shy. However, the actions of her and her siblings are constantly being recorded and broadcast on TV, allowing the citizens to choose which one to elect as the next king.

As aforementioned, Castle Town Dandelion is a very cute and low-energy comedy that doesn’t need to do too much in order to please its audience, but does just enough that it hits inside the strike zone. Like most gag manga turned anime, it holds onto all the common staples such as: A and B-side story parts that usually center around specific characters, running jokes, and many offbeat vignettes that add to the endearment. With most of the earlier episodes focusing on the main heroine and 4th Sakurada child Akane and her shy disposition, there are plenty of moments where the brand of comedy shines through and should give the viewers a good idea if this will be for them. However, in the later episodes and more than often, B-side segments, the other Sakurada children are given the spotlight focusing on their various personalities, misadventures, relationships with other family members, and reasons for wanting to be king. Granted that the motivations are not all that interesting (with exception of a few), they do say a lot about the characters and usually for the betterment of the family rather than for selfish gain. Well, expect for Akane…she just wants to move around the city without being monitored by security cams and gain some confidence in the process. Cute and off-center as the show can be, it does follow a relatively easy to connect narrative, yet does work off one of superfluous nature.

Hesitant to give a complete rundown of all the children, I do find the inclusion of supernatural abilities intriguing even though they have very little impact on the immediate story. There are the common types like eldest son Shu’s ability to teleport or youngest son Teru’s ability to gain superhuman strength, but also some unique one’s like third child Kanade who make any item instantly in exchange for money. Again, while the added element has no plot bearing or explained sufficiently, I do like it being there and does slightly differentiate it from other series. Other than that, there isn’t too much else to mention and runs along the same pathway of design as many slice-of-titles, so should digestible for almost anyone. Well, unless you hate the usual pandering that is associated with this particular type of show. 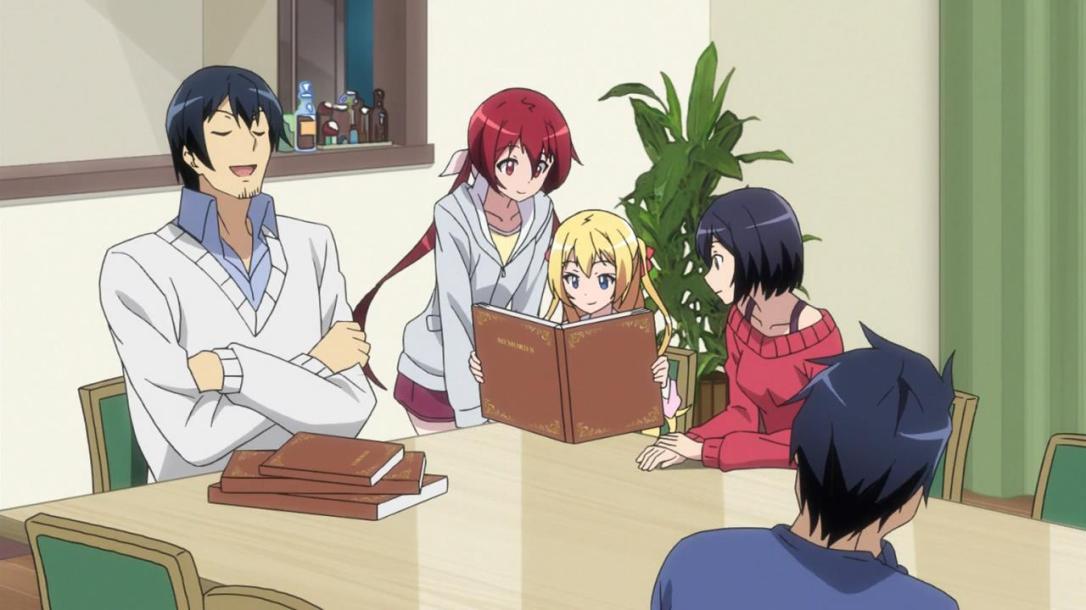 Production IMS being the lead animation studio, I don’t know terribly too much about them, but can say that the style and quality looks to be a perfect fit. While most of the character designs look generic and homogeneous (even in the case of the siblings with different hair colors), the animation itself is about as excepted and art style seems to benefit. Plus, Akane and Shiori are the very definition of moe, so it does at least help with the cuteness factor. The soundtrack is nothing special and contains the usual high-energy and sentimental tracks for the appropriate the mood. It is quite interest to note that the composer Tabuchi Nastumi is relatively new and this is his first project, so will be intriguing to see the breadth of his abilities in future projects that don’t necessarily manifest themselves well here.

With my only regret regarding how out it ends (even though I seen it coming a mile away), Castle Town Dandelion is a light and fluffy piece that accomplishes what it sets out do and provides a fun reprieve in the face of what the rest of the season has offer. Not as noticeable as other offerings like Himouto! Umaru-chan or raunchy like Prison School or Shimoneta, it is a clean and lighthearted alternative if nothing else. If you have the time and like the quirky type slice-of-life/comedies I would suggest it, but I wouldn’t recommend going out of your way for it.