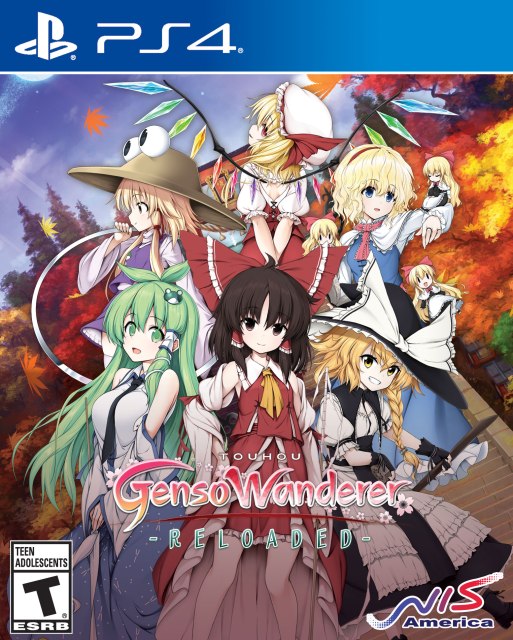 Touhou Genso Wanderer Reloaded offers players a trip to Gensokyo for a round of rougelike adventures. However, for returning players and newbies alike, is this bizarre journey worth the effort?

Over the past three years, English language regions have seen more than a handful of Touhou fangames release. From Genso Rondo to Adventures of Scarlet Curiosity, each title differing in style and quality, most never struck my viewpoint as using the property to the fullest capacity or even appearing all that entertaining. Out of the many choices out that currently exist, the 2016 release of Touhou Genso Wanderer, a rougelike taking place in the world of Gensokyo and starring many characters from the franchise getting caught up in various incidents seemed to fare better. With the original being short in scope, Touhou Genso Wanderer Reloaded does promise a modest upgrade to what is already in place. Question: Does it manage to fulfill that promise? Answer: Yes, I would like to imagine it does the original proud and then some.

For those that have never played the original, Touhou Genso Wanderer is very similar to the Mystery Dungeon (if you really want to overuse the comparison) or Shiren franchise – borrowing and using many of the classic staples. This includes elements like: randomly-generated dungeon layouts, inventory management, traps, and the always perilous management of food. Of course, unlike the aforementioned titles, Genso Wanderer does have its own special elements that make the game not only more approachable, but also reducing some of the tedium the genre can bring. For one, while items you find are random, it is possible to clear dungeons with weak equipment since it levels up as the player fights. Add to that the ability to combine equipment and take certain skills from others, and you no longer have to worry about having to get lucky to find powerful equipment just to progress. By no means does this make the game easier, yet cuts down on some legwork that it would require and saves time. In addition to keeping yourself well-equip, you can also do the same for partner characters, a helper of sorts and another area where Genso Wanderer shines. Unlike other titles with this mechanic that has the A.I follow the player around, the companions do prove themselves to be more than capable of using a few tricks. From ordering them to scout ahead to throwing out a wide range of seemingly infinite special attacks, the companions will more than likely save a dungeon exploration trip from ending in failure or at least, surviving long enough to reach the goal or means of leaving intact. And with twelve more characters entering the lineup, the combinations and possibilities only increase as well as having your personal favorite lend a hand. Sadly, much like the next topic, they have to be unlocked during the main scenario.

With the original Genso Wanderer only containing one distinct scenario arc (Reimu) and two offered as DLC (Aya and Futo), Reloaded bumps the number up to five adding in stories for Marisa and Sanae. Like with companions, while players will not able to access them right way and have to meet various conditions, it will not take long at all to experience their arcs and everything else beyond that. After doing a rough estimate, Reimu’s entire story took me around 12 hours to complete and an additional 8-9 hours each for the others. However, for those that have to do everything: collect all the equipment, see every special attack cut-in, and see every event scene – your overall time will vary.

Not much in the visual department has changed for Genso Wanderer Reloaded, but still looks as bright, colorful, and cute as the initial PlayStation 4 and PlayStation Vita release. With the Nintendo Switch also receiving a release this time around, the game doesn’t look any less impressive and runs smoothly both in dock and undocked mode – noticing no slowdowns or performance issues. For those that missed the first iteration, Japanese voice-overs are included, but will take some twiddling in the options to make sure they can be properly heard in sync with sound effects and background music. That being said, with the music being variations of recognizable Touhou originals, I think some fans and neophytes alike will enjoy the musical score.

Having spent a great deal of time with original Genso Wanderer and purchasing the DLC, I am so glad that there is a version that brings it all together and offers a little extra. It is a shame that there isn’t an upgrade option or add-on (that I know of anyway) for fans that purchased the original version, but seeing how it does include the aforementioned content, it is well worth the value, especially for newcomers. With a wealth of other games to trudge through, Touhou Genso Wanderer Reloaded seems like another perfect addition to get lost in.

Pros: Two extra story arcs alongside DLC from the base game, more companion characters to use in combat with unique skills, equipment levels up as the character does, extra event and scenes for many side characters.

Final Verdict: Being twice the size of the original version, Touhou Genso Wanderer Reloaded is the definitive version and best way to experience this weird and wacky adventure. With the cast of character already established, it might not be best for new players, yet die-hard fans will most likely feel right at home. With so much content to see and unlock, it is one of those games that will serve your time well and possibly, drown it in hours of enjoyment.

Disclaimer: In no way, shape, or form was I compensated for the composition or publication of this review. This by my own volition. A review copy of the game was kindly provided by NIS America.