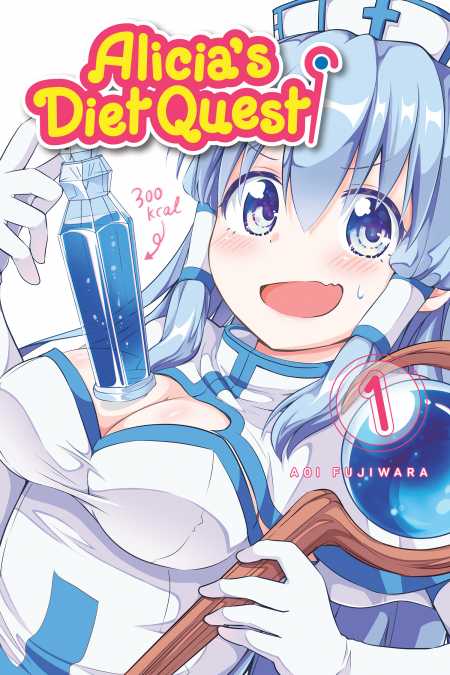 Use Slime as an exercise ball! A treasure chest as a stair-stepper! Low-calorie herbs as snacks! Powerful weapons, phenomenal magic, and fierce monsters! The beautiful priestess Alicia will try anything and everything in her struggle to lose weight! Cuz before she can defeat the Demon King, she’s gotta defeat this accursed blubber!

When it comes to dietary and nutritional health, everyone has an ideal way of obtaining fitness. However, if your workout regimen consist of jumping on slime and causing your companion all sorts of grief in their quest to defeat some nondescript demon lord, by all means, see healer Alicia for tips. Wait a minute…don’t do it. Written by Aoi Fujiwara, volume 1 of Alicia’s Diet Quest is a palatable beginning to a comedy series…even if it doesn’t manage to bring anything new to the table.

As aforementioned, following the duo of hero Ryan and his weight conscious priestess Alicia, the two are on a quest to defeat a demon lord…with Alicia trying to turn every little inch of it into her own personal sidequest to shed some pounds before the showdown. Following the style akin to a four-panel comic, the continuous vignettes synchronizes perfectly with the pacing making it a rapid fire knee-slapper with every turn of the page. Thanks to the fantasy-esque setting, the manga does have thematics on its side as well – using many tropes and elements found in the genre as well as RPG’s solidifying it’s identity. One my favorite gags comes from HP being referred to as “hunger points”, Alicia usually losing whatever she has by breaking her diet or monsters helping in that regard. Even though I could go on with the many references (Dragon Quest and Final Fantasy aren’t the only ones) fans of the aforementioned genres will be able to point them out easily.

Granted that the humor and everything else surrounding it writes itself, Fujiwara’s real strength is comedic timing. Yes, Alicia’s incompetent attempts to succeed while causing Ryan and everyone/ everything in the vicinity more pain than it’s worth is the main draw, each vignette just has a certain charm due to the careful execution that leads to some pithy, yet sometimes abrupt jokes. On the other hand, the artwork itself contributes to that charm: simple in scope and details, yet expressive when needed. It’s always a joy to see the characters (Alicia in particular) change the look on their faces at the drop of a hat.

Having come across other series that invokes the same topical humor, Alicia’s Diet Quest is not at all bad in what it does, yet like the other unnamed titles, worries about the gags running thin do come to mind. However, with this volume alone already starting off strong and checking off the common conventional skills I find admirable, it has potential to keep working off this bumbling duo in their arduous journey against demon lords and diets.