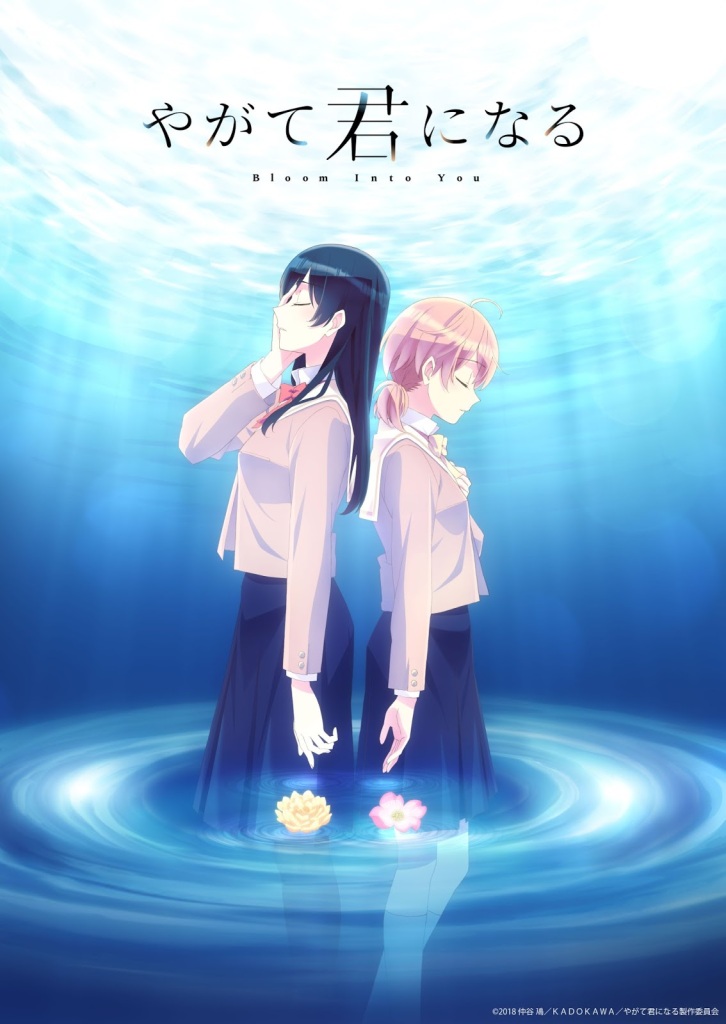 For the longest time, most works under the yuri genre have always left me with an impression of being on the idealistic and shallow side. With nothing wrong enjoying the rose-colored and floaty relationship of maidens or intense latticework dramas, sometimes a down-to-earth approach is appreciated.  Well, just about as close as you can get to down-to-earth. Viewing Bloom Into You (Yagate Kimi ni Naru), an entry for the Fall 2018 anime season, not only is it an exceptional addition to the yuri subgenre, but great romantic tale with a keen eye for interpersonal relationships and inner growth.

Yuu has always loved shoujo manga and awaits the day she gets a love confession that sends her heart aflutter with bubbles and blushes, and yet when a junior high classmate confesses his feelings to her…she feels nothing. Disappointed and confused, Yuu enters high school still unsure how to respond. That’s when Yuu sees the beautiful student council president Nanami turn down a suitor with such maturity that she’s inspired to ask her for help. But when the next person to confess to Yuu is Nanami herself. Has her shoujo romance finally begun?
.

Most of the masterstrokes the series unleashes comes from the main characters: 1st year high school student Yuu Koito being one, a girl unable to experience the appeal of crushes or young love. That is until she meets her senior, Nanami Touko, a girl she views the same due to her assertion to only date those that stir her feelings…something that Yuu inadvertently manages, despite missing the same spark for her. Over the course of the series, the two try to work toward understanding one another in order to push for a breakthrough into a proper relationship as well as resolve personal emotional baggage such as Nanami trying step out from under the shadow of a certain family member and Yuu trying work past her own frigidity. Coupled with writing that is able to easily pivot between an atmosphere of comedy and drama, not only does it perform well when it comes to storytelling, but also allows the other minor and major characters to have significant agency. A fine example of this would have to be the character Sayaka Saeki, Nanami’s best friend that has more than friendly feelings toward her, but doesn’t want to risk ruining what they have, despite being somewhat jealously toward Yuu’s intrusion between them.

Besides being well-written, another strength that Bloom Into You carries is also being well-directed and executed. From the spoken dialogue and syntax choices to the visual cues and unspoken dialogue, the series is layered in so many carefully chosen complexities and details that viewing it from just one angle can be enjoyable, yet unpacking the entirety prompts multiple viewings that can be just as tantalizing. One of my favorite examples come from a later episode where Sayaka, Yuu, and Nanami pose the question to each other throughout the episode of what color Hydrangeas they like, a flower carrying the meaning of heartfelt emotions, but the color dictates the meaning. However, in the same episode, when Yuu and Nanami are together, they pictured in front of blue and purple: the former meaning an impassive feelings and the latter more a deeper desire to understand – both representing Yuu and Nanami respectively. With so many visual and verbal symbols like this, both the character actions and words share an equal amount of weight making the moments so much more satisfying to watch without explicitly throwing it to the audience. Needless to say, animation studio TROYCA doesn’t miss a beat being able to imbue the artwork and scenes with substance, style, and extra subtlety. Did I mention that the artwork is very vibrant and pretty?

One of the more striking details of Bloom Into You going back to part of the actual writing is how it does touch on and the issues of same-sex relationships. Where the series does treat the latter component with some shred of authenticity, it isn’t exactly afraid to put it on display. Even so, the series also doesn’t manage to prod the issue either, the Japanese version being slightly neutral in it’s intent than the English dub that sometimes blurs the interpretation of a few lines of dialogue when brought up. For example: when Yuu is sitting around bantering with the family after her mother meets Nanami, they try to decide how close they are with Yuu’s sister making a snide joke about them being lover’s and her father being slightly more flippant in responding in the Japanese than English track. Of course, with this occurring more than once and not just for that particular issue, it might be more of a translation choice than anything relating to the subject matter. Either way, it can be sort of disheartening for viewers looking for something more substantial, yet does enough to get the point across.

Where Bloom Into You will definitely find it’s audience based on the subgenre theming alone, there is more enough for those not particularly fond of such. Coming full circle in the conclusion, beyond being just about interpersonal relationships, the series overriding theme of acceptance and being who you really are is sure to speak much louder and clearer to even the most fickle of viewers. Having experienced many series already under the same guise, I can at least say that Bloom Into You is a restorative balm to the subgenre that is more than mere fluff.

Final Verdict: Beautiful, well-written, and just plain great, Bloom Into You is an shinning example for the yuri moniker to follow for relationship building, but also exquisite for it present. Still to shun by those that don’t quite appreciate the type of romance it explores, for those unwavering, a dynamic and mostly gratifying experience is to be had.