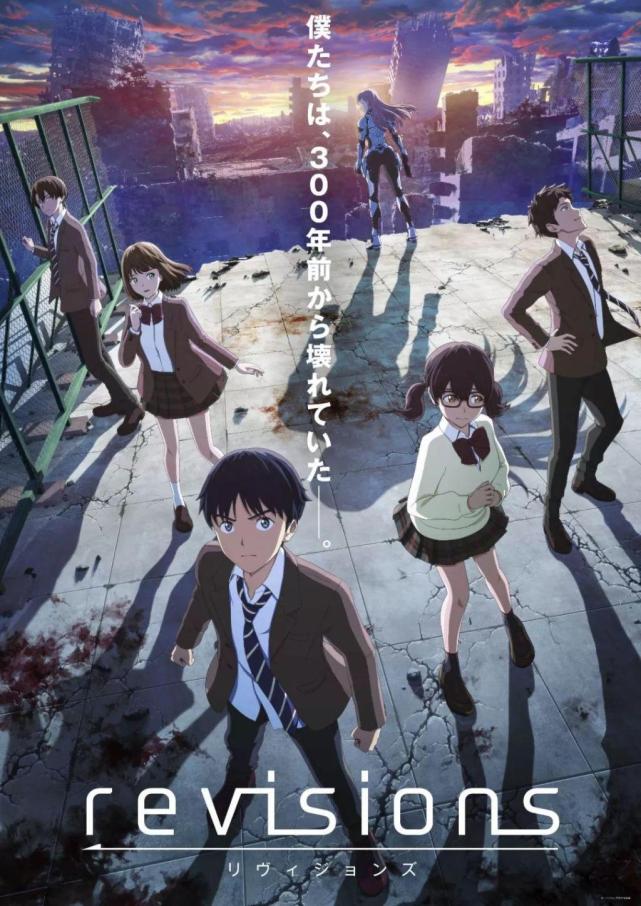 A group of 5 high school students defend all of Shibuya from monstrous invaders in the desolate future world of 2388.

“This is a prophecy for you, where five people will meet huge adversaries, and only you can protect everyone.” Daisuke Toujima is a second-year high school student who was abducted when he was young. He was involved in a special phenomenon—Shibuya Drift—with his childhood friends Gai, Ru, Marimari, and Keisaku. They were transferred to the center of Shibuya over 300 years into the future. What’s waiting for them is endless wilderness and forest, Interspersed ruin, future citizens, and “Revisions” which are huge mechanical monsters. Trampled by the monsters without understanding the situation, a girl who has the same name as the person who saved Daisuke when he was abducted, Miro, provided a mobile suit “String Puppet” and told them to save Shibuya. With separated paths, adversaries, destined prophecies, the boys, and girls are on their journey to return to their original time.

From the many directors that have walked the hallowed of Sunrise Studios, Gorō Taniguchi is certainly no amateur. Responsible for overseeing celebrated titles like Code Geass and s-CRY-ed, he is a proficient individual at merging man and machine into an epic mix. Even better having Makoto Fukami along for the ride, scriptwriter and author of Magical Girl Spec-Ops Asuka. Somehow, with that amount of talent, studio Shirogumi couldn’t possibly go wrong with anime series Revisions, right? Airing during the Winter 2019 anime season, it appears to have all the makings of a respectable sci-fi/mecha series. Respectable or not, Revisions has it’s moments, then again, those moments are barely passable.

Having laid witness to plenty of science-fiction anime series gone awry, Revisions is an actually salvageable one. Sure, the whole entire district of Shibuya being sent to the desolate future and faced with the prospect of using a group of high school kids that can control robots to defend them from an inhuman race is so in your face 1995, there are plenty of other points of interest. With a sound narrative, uncanny atmosphere, and a few compelling details that fly at full mast before the action kicks in, Fukami’s style of fraught writing definitely kicks the series heartbeat into overdrive for some truly astounding possibilities. So where is the problem? One particular sore point the series faces is the characters – most being about as interesting as a box of cornflakes and not exactly strong enough to bear the heavy cross this show has arched on its shoulders. Out of all of them, leading boy that doesn’t need to be told to get in the robot, Daisuke Dojima – a kid with a hero complex the size of Shibuya supplanted by a failed kidnapping years ago, can’t stop chanting his mantra of having to protect everyone from the impending danger Shibuya finds itself in. Granted that Daisuke is far from the gallant and charismatic savior this sci-fi isekai needs and certainly can’t possibly deserve, his blunders and missteps in the series are painful to sit through, yet inching through episode by episode finally becomes a source of mind-numbing agony, despite the payoff that comes from near the end. Trust me, the guy is more annoying than the oafish power hungry mayor, Seiichirō Muta. Of course, not saddling Daisuke with all the blame, with his childhood comrade-in-arms and many faces of Shibuya not making an impact either and triggering the desire to lob rotten tomatoes, it is hard to care otherwise. If anything, Milo, an AHRV agent from the future assisting the community in the battle and saving Daisuke and friends in the past, she is one of the more interesting characters. But with the role so pigeonholed and nothing to offer other than exposition early into the series, again, the hurdles are high yet still springs eternal for this to be so much more.

Despite the “villainous” Revisions having Shibuya up against a brick wall for the duration of the series to face dwindling resources and leadership dysfunction, plot points that seem so much more interesting than they sound but go nowhere, why and for what purpose the Revisions have for holding Shibuya hostage is one of the more engaging details. Unfortunately, with a plan involving confusing time travel antics and even more questionable backstory on the history of how the Revisions came to be, the engagement level balances itself out. Being left with nothing more than a story for survival with humanity fighting tooth and nail against these fearsome futuristic foes, the struggle is enough to hold attention and creates some sort of stakes, but with it taking so long to actually get to the real meat and potatoes, you are practically begging for things to conclude. Holding all of the cards close to the vest, the so-called “twist” in the story comes so far out of left field it will leave viewers with a mild concussion and more than enough whiplash that making sense of it all. But hey, if you managed to survive up past the halfway mark, the series does begin to hit a more energetic and enjoyable stride.

Like many anime series that Netflix has had the pleasure of hosting, everything for Revisions is done in CG animation. Cheap, cost-effective, and smooth, the animation is at least bearable and fits the show unlike plenty of other titles that go after the aesthetic. Nothing too technically marvelous stands out and sometimes can be a bit glaring, but when it comes to action sequences and character facial expressions, it has a certain amount of charm you just can’t get from a hand-drawn style. The only complaint is that the character designs from Sunao Chikaoka don’t seem to benefit any, yet looking at his work in series like “Wake Up, Girls!” it is a common issue. Having both viewed through the English and Japanese audio, the two are equal to one another and nothing major separates the two in syntax or otherwise, so all comes down to preference. Daisuke will still grate on your nerves in any version, so don’t think you are going to Matrix-style dodge a bullet in that regard.

Knowing that Taniguchi and Fukami are capable of so much more, Revisions is still far from a travesty. It has its annoying thorns, some that are downright baffling to move around, but no matter how you prune and present it, the result is an imperfect flower that is still pleasing to the senses. Lacking any type of metaphor for how it also tries to tease a second season at the very end that I hope will never materialize, I believe your mecha cravings will have much to contend with here. All things considered, I would say that Revision is worth a watch if you are willing to put up with some mild annoyances for an average title.

Final Verdict: Having all the elements necessary for an excellent sci-fi ride, Revisions settles for something less. With bland characters, interesting direction, but weak follow-through, it has more than enough positives to cancel the negatives and vice versa. Of course, if you can get past some of the disappointments and one majorly annoying lead, there is something of a decent series with some glaring flaws attached.