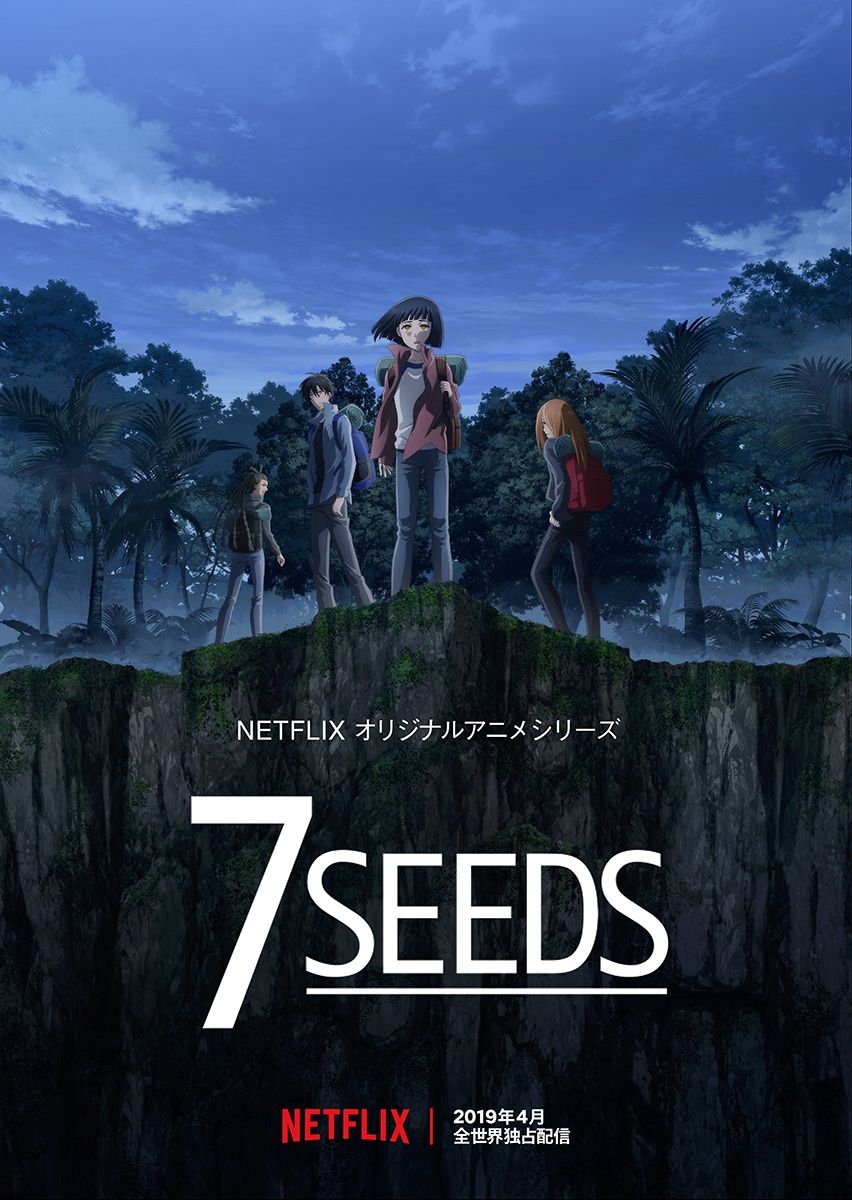 The last remnants of humanity are thrown into a new version of Earth and forced to survive.

In the immediate future, a giant meteorite has collided with earth. All living organisms, including mankind, have been wiped off the face of the planet. The government, who had foreseen this outcome, took measures to counter the worst-case scenario. In particular was Project “7SEEDS,” in which five sets of seven young men and women were carefully selected and placed into teams (Spring, Summer A, Summer B, Autumn and Winter). Each participant was then put under cryogenic sleep in hopes of preserving the continued existence of mankind.

When those men and women awoke, they found themselves suddenly thrust into a cruel world. While bereft and grieved over forever losing their loved ones, they sought to find ways to survive.

One trend that I have been elated to see from the anime industry in recent years is the exploration of remaking older titles for newer generations. Loving nothing more than to give my undivided attention to series that I have missed out on in the past, the choices of what gets the anime red carpet treatment is still so much of a mystery I would give anything to be a fly on a wall in some of the industry meetings. After all, so many fine candidates exist. Mangaka Yumi Tamura is a great example: best known for her fantasy epic Basara, her talents for creating compelling characters and larger than life scenarios certainly deserves to have her works animated. Studio Gonzo must have thought so too with 7 Seeds, Tamura’s debut work. Set to the tune of the survival genre, there is more than meets the eye of this series that shines as much as it unfortunately suffers.

As someone that doesn’t take too easily to the survival genre, 7 Seeds actually has a lot of positive aspects and elements working in its favor. Where the initial story plunges viewers into the fray with a handful of humans forced to survive in a version of Earth where humanity is no more is less than promising, once the details are sorted out, this becomes one big roller-coaster of excitement and revelations that keeps on giving. With the members split into several teams named after seasons spread across ruined Japan, Summer B which Arashi Aota is apart of, he is frantically searching for any clues his girlfriend Hana might still be alive. Unbeknownst to him, she is having her own dilemmas in team Spring. Over the course of the series, it masterfully paints a picture of this new unfamiliar world as the different characters venture out to find what is left behind. Having no deficiencies in threats ranging from animals, biological, and other teams, each episode is a thrill ride with never a dull moment, but always allowing for the audience to catch their breath. Governmental conspiracies and other clues also scattered about, plenty of small details and personal stories lead into the larger narrative without much complication and make for some riveting developments in these first 12 episodes alone. However, with most of the “riveting” developments delivered with the urgency of a snail dying in a pool of salt and a little more ho-hum in making sense of it all, your world will not necessarily be set ablaze.

Deliberate and simple in approach, there is a lot of credit that can be attributed to directorial prowess making it all happen. There are both good and bad parts to this equation. With most episodes shifting around and changing perspectives between characters and teams, there is a lot of contextual information floating around that is never too cumbersome or dense to digest. In fact, the more information provided through character backstories (some which are really good), left behind records, and the environment, the more it does spur on a feeling to learn more about the world and what is going on. With binging never something I like to partake in, surprisingly, the series lends itself to it very well. Never feeling the need to return to certain episodes or as if I was missing information, everything the viewer needs to know is put out on the table, with a few elusive threads that are not far behind. Granted, there are some details that I’m not sure conforms to believability, but I’m willing to put my goggles on to suspend belief. I just wish I didn’t have to do it so often like seeing a little girl floating unconscious in a surging ocean current without drowning to death. I digress on that. The problem? For a 12 episode series, it does seem to be on a very tight and quick pacing arrangement. Knowing nothing of Tamura’s source material, this first half takes viewers all the way up to volume 16 of this 35 volume series. Having no inkling or particular feeling that anything was off during my initial viewing, from episode to episode, there is something nagging at me that there might be more in the source material that is not completely not showing up here. Taking the series on the merit of what it has shown, so far, I can’t say I find much of what is presented objectionable, yet does introduce some uneasiness, especially with some scenes that are shaky at best when pivoting to one idea to the next.

For a title with a mess of characters to keep track of, 7 Seeds cast is actually really manageable. Having no issue remembering a bunch of faces and names introduced, the aforementioned backstories and information presented to make them memorable works to a degree. One of my favorites so far comes from Takahiro Aramaki, a member of team Winter who’s own arc is more than tragic (like a few others), but can’t specifically say that the story helps in making him more interesting. Hana is another interesting case that has a knack for wilderness survival in part to her strong-willed personality. I just hate that on multiple occasions (and one in particular) she is stifled in that respect. Then again, that is more than I can say about Natsu Iwashimizu, the supposed main character in Summer B with Arashi. Having a very sweet relationship budding with him, I will give her that her interactions with Semimaru are a highlight of a few episodes, the two initially clashing and the latter not that likable at first. In many respects, referencing later episodes, the character dynamics and connections made do aid in helping solidify many of the supporting and major roles, but with it passing by in a blur…it doesn’t stand up too well.

Knowing that Gonzo has had some shabby looking productions in the past, this one is no different. Awful as the animations are for details like character movement and facial expressions, the artwork in itself is decent. Not the biggest fan the halation effects used in some the scenes, the environmental areas that visited are least pleasing to the eye if a little dull. Character designs are another area that isn’t too bad and at least helps in differentiation between a few with the same face syndrome. Music is another area where the series is also rather average but can say that the tracks are fitting if nothing else. Airing no Netflix, an English and Japanese voice over option is included. Finding nothing of major contextual difference or change, either is a safe bet.

As aforementioned, with season one leaving us at volume 16 of the manga and the episode itself ending on an extended thought, there is still more of the story to get through. Hating that Netflix’s seems like a stranger to the content it owns with no additional information, it might very well be until next season or near the end of the year to see how things progress. Despite having a relatively positive reception so far, I’m still in no desperate state to see how this all pans out. Here is to an interesting ride ahead….hopefully…

Final Verdict: Bold, brutal, and beautiful, Yumi Tamura debut work fully comes to life with this anime adaptation. Plagued with some less than stellar directing choices and supported by others along with solid writing, the first season of 7 Seeds is thrilling but does feel like it is holding a lot back to and should be more than what it is now. Were it can’t thrive on characters or momentum alone, it at least has enough pushing forward to make it serviceable and cover some of the shortcomings in plain view.