Last year, Genkai Tokki: Moero Chronicles H released for the Nintendo Switch, which turned out to be an enhanced version of the Steam in 2017. In a nutshell, I would best describe the game as being an entertaining mix of unrestrained, sexy fanservice and even more, raunchy comedy held together by an otherwise solid dungeon crawling experience. Despite some of the issues it had, it was probably one of my favorites from the past year, even though it was unlikely that the 2015 followup would ever be released. Thankfully, Genkai Tokki: Moero Crystal H did arrive (courtesy of EastAsiaSoft), and happy to say that it is a better experience than the original despite still having a few of the same problems.

The premise centers around a young man named Zenox looking for the whereabouts of his missing father in the city of Arthenon. After a series of events, Zenox teaming up with shrine guardian Luanna, the pair must search for the stolen Bra of Darkness, a powerful artifact that if not kept with its counterpart, Panties of Light will usher in the world’s destruction. Having no other choice, Zenox acquiesces for a quest far beyond what he is expecting. Keeping with the spirit of the original, the game’s story is outrageous and never takes self too seriously that results in an overall more digestible one and genuinely delightful. Zenox is also a very likable protagonist whose level-headed personality and interaction with the various monster girls he befriends end in some very humorous repartee. 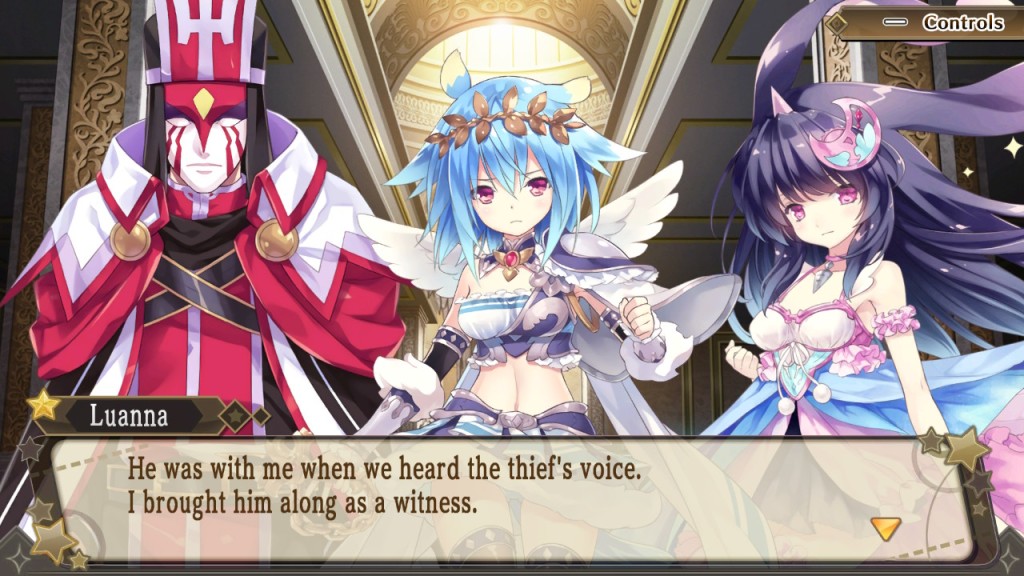 Before setting off for the various dungeons, the city of Arthenon acts as the hub for preparation. At first, options are limited to buying/selling at the shop and interacting with your teammates at the inn. As the story progresses, more useful facilities will open like a facility that allows your team to a temporary boost to stats before entering a dungeon and one that allow players to strengthen equipment found or brought. There is even a mini-game reminiscent of a vertically scrolling shoot ’em up that can uncover short dungeons that confer various benefits like unlocking new skills when cleared. 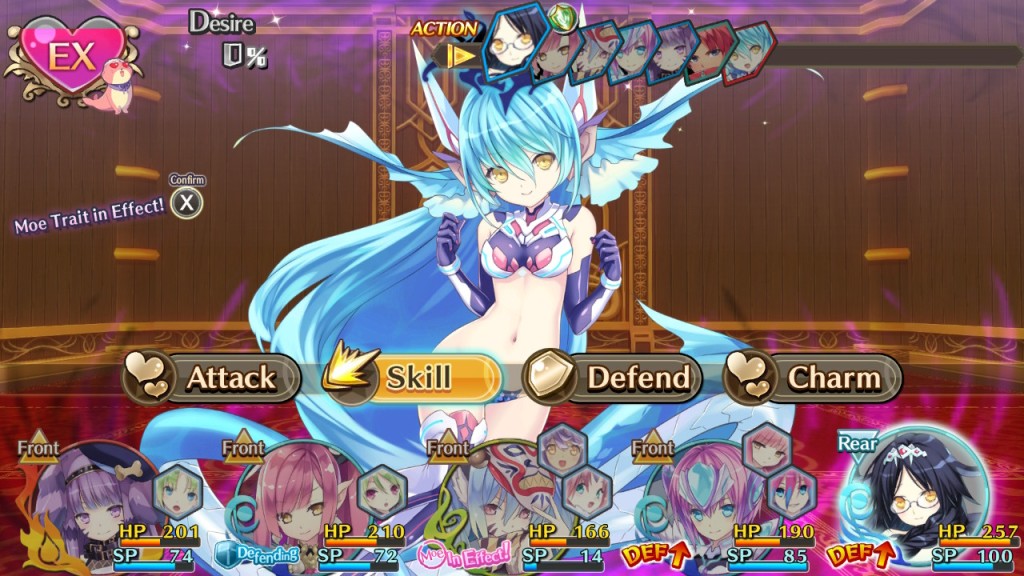 For anyone familiar with the previous game, not much has changed in terms of dungeon exploration. The objective of each area is to take down the “Area Leader” while running into other monster girls that will be able to join your party when defeated. That defeat is accomplished by way of the “Bumping Scratch” system that will offer the player a vertical view of the monster girl mostly undressed and have to rub various parts of the body to purify them before time runs out. Of course, in a new addition, if the player wishes to do it later, they can use an expensive item that allows you to take them a facility in town to do at your leisure. With over 80 monster girls (some even returning from the first game making 86 counting free DLC) on the roster possessing different skills and the ability to change classes, customization and team composition can get involved and just another aspect that makes the dungeon crawling enticing.

While Genkai Tokki: Moero Chronicles H is a better game than the previous entry, as aforementioned, there are a couple of flaws. For one, unless you play in undocked mode, the controls for “Bumping Scratch” might be a little troublesome to deal with. Another that the encounter rate is absurdly high as it was with the previous game. Even with using monster girl abilities or items that can be found throughout the game, it is somewhat tedious trying to map out a floor without being slammed every few minutes. I also noticed that when undocked, menuing in shops also was a little slower than it should be. Again, while noticeable flaws, it is probably nothing an update can not remedy.

Final Verdict: With small improvements and additions made on the original’s framework, Genkai Tokki: Moero Chronicles H is a game that is both easy to play and a joy to do so as well. While the aspect of fanservice and raunchy nature might be a turn off to many, for those that stick around, a fine dungeon crawler with many hours of play and many more after the credits roll will await.